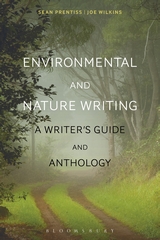 Finally, as I catch up on things that passed me by in the rush of this last fall semester, I’m really excited to see that Environmental and Nature Writing: A Writer’s Guide and Anthology is now available from Bloomsbury Academic. Sean Prentiss and I worked super hard on this one, and we think it’s a great text for classes in environmental studies programs focused on writing, as well as classes in English and creative writing programs focused on nature and the environment. And the anthology is, uh, really damn good. We’ve got essays, stories, and poems from a host of the sharpest, bravest, wisest, and most diverse nature and environmental writers working today, including Camille T. Dungy, David Gessner, Jennifer Lunden, Erik Reece, David Treuer, Bonnie Jo Campbell, Alyson Hagy, Bonnie Nadzam, Lydia Peelle, Benjamin Percy, Gabrielle Calvocoressi, Nikky Finney, Juan Felipe Herrera, Major Jackson, Aimee Nezhukumatathil, Natasha Trethewey, and many more. 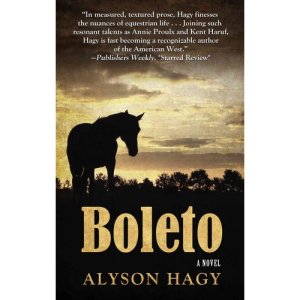 On the second page of Alyson Hagy’s quiet yet striking novel Boleto, Will Testerman, a young Wyomingite with a restless sadness in him, considers one of his quarrelsome father’s long-time complaints: “Town is eating its way right past us . . . When I was a kid, you couldn’t pay people to live in this part of the state. Too cold. Too much isolation. Now everybody in America thinks they’re in love with fresh air and loneliness.” Will dismisses his father, a man who has given himself over to a town job he hates to supplement the lean years on the ranch, as a man who has bartered away what he once held dear, as a man unable to dream. Will Testerman, though, now there’s a dreamer. Will has an ache for a kind of wild, elemental excellence. He dreams of working with horses, the best horses—and making them even better.

Will’s journey, of course, is not nearly so simple and clean and honest as he would like it to be. From slopping stalls as a groom for horse people in Texas to training polo ponies in suburban southern California for the mysterious Don Enrique, Will finds that the American West has been and continues to be the play-place of those who’ve extracted or variously used its mythic landscape and its people for all they’re worth. Yet Will’s dream blinds him to this abuse, to the greed all around, and before he knows it he finds he must choose to either follow his vision of horsemanship or save an illegal immigrant he works with from a cruel fate at Don Enrique’s hands.

He does the right thing, of course; he sells his prize filly and turns for home. Though he will come back to his father’s house a well-to-do man, though his father will very likely congratulate him on his success, we understand he has lost nearly everything, and our hearts break for him. “Ah, shit,” Will says to his filly Ticket, trying finally to explain himself and his stinging dreams. “It ought to be simple, right? You do a thing, and you do it right, and it gets done. But this stupid Wyoming person kept reading the situations wrong. He kept getting the people so wrong that it didn’t matter if he got the horses right.”

Like one of those country songs where everything goes wrong, I left Boleto still humming Hagy’s wide-open, wind-and-worry tune. Even a few pages into the book, we’re pretty sure things aren’t going to work out for Will. But that doesn’t matter. The sad, expansive, affecting particulars of Will Testerman’s journey of disillusionment are what make the novel so fine. Hagy’s Boleto offers us the best that tragedy and fiction can: another mind, another heart, another world. We are moved by Will’s brilliance—his devotion to doing things right, his quiet and impressive competence, his love and care for those around him. We are moved as well by his faults—his blind ambition, his fumbling for relationship. Though Will Testerman is brought low by the end of Boleto, I feel myself grow larger, as if I might turn from the pages and move through my world with more care and grief, able to better feel the wind.

Between Texas and California, those two disastrous poles, Will takes summer work as corral boss at a dude ranch in the Absaroka Mountains of northern Wyoming. It is here, in the company of horses, wolves howling in the night and elk wandering the mountain draws, that Will seems most himself, that his honesty and his earnest, hard-working nature are most on display. One day, out on a ride, he and a boy from Georgia get caught in a rain storm. The cinch on the boy’s saddle breaks, and they are forced take shelter in a shallow cave, the roof blackened by ancient fires, while Will fixes the saddle. “Have you always been a cowboy?” the boy asks Will:

Will laughed and put his hat back onto his head. The kid had bought a silver felt hat for himself in Cody before he got to the ranch, and he had never taken it off, not during the entire ordeal. Not like you mean, he said. I was a boy first. I used to play football like you play soccer. I did all those science and history projects in school.

Though Will’s answer is gentle and knowing, it might be the very key to his tragedy. Even in this good place, a place he can almost be what he is, Will Testerman can’t quite say it. Or maybe it is that he doesn’t know. No matter, if he can’t claim it here, where there is still some room for a cowboy in the world, Lord knows there won’t be anyplace else for him.