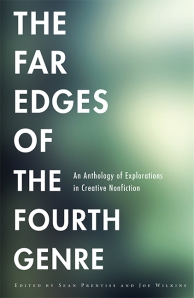 A few years ago my friend Sean Prentiss approached me about putting together an anthology focused on craft issues in creative nonfiction. As writers of essays and memoirs ourselves, as professors of creative nonfiction, and as former students of nonfiction greats Mary Clearman Blew and Kim Barnes, we knew all sorts of fascinating conversations were being had about the genre–yet there were very few texts that collected and forwarded these ideas. So, we got to work: we contacted writers we admired, we edited and offered advice, we set the essays next to one another, and now The Far Edges of the Fourth Genre: An Anthology of Explorations in Creative Nonfiction is on its way into the world! Here’s a bit more from the publisher’s website:

Though creative nonfiction has been around since Montaigne, St. Augustine, and Seneca, we’ve only just begun to ask how this genre works, why it functions the way it does, and where its borders reside. But for each question we ask, another five or ten questions roil to the surface. And each of these questions, it seems, requires a more convoluted series of answers. What’s more, the questions students of creative nonfiction are drawn to during class discussions, the ones they argue the longest and loudest, are the same ideas debated by their professors in the hallways and at the corner bar. In this collection, sixteen essential contemporary creative nonfiction writers reflect on whatever far, dark edge of the genre they find themselves most drawn to. The result is this fascinating anthology that wonders at the historical and contemporary borderlands between fiction and nonfiction; the illusion of time on the page; the mythology of memory; poetry, process, and the use of received forms; the impact of technology on our writerly lives; immersive research and the power of witness; achronology and collage; and what we write and why we write. Contributors: Nancer Ballard, H. Lee Barnes, Kim Barnes, Mary Clearman Blew, Joy Castro, Robin Hemley, Judith Kitchen, Brenda Miller, Ander Monson, Dinty W. Moore, Sean Prentiss, Lia Purpura, Erik Reece, Jonathan Rovner, Bob Shacochis, and Joe Wilkins.