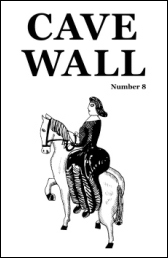 I have two poems in the most recent issue of Cave Wall, which also features wonderful new work by Robert Bly, Jillian Weise, and many others. Though Cave Wall is relatively new to the scene, editor Rhett Iseman Trull has really put together a wonderful magazine of verse.

﻿﻿﻿﻿Cave Wall, published twice a year, is a national literary magazine dedicated to publishing the best in contemporary poetry. We are interested in poems of any length and style from both established
and emerging poets. Each issue includes black & white art, as well. Poems first published in Cave Wall have been featured on Poetry Daily, Verse Daily, The Writer’s Almanac, and in the Best New Poets awards anthology.

What folks are saying about Cave Wall:
“In a community that is thriving with literary productivity, a fresh poetry journal has made its debut. Cave Wall…released its premier issue this winter to a flood of positive reaction and readership.”
–Jennie Thompson, Go Triad
“[Cave Wall‘s] goal is to offer poetic wonders. This first issue succeeds wildly.”
–Charles Wheeler, Greensboro’s News & Record
“Cave Wall is a primal urge you must satisfy.”
–Anne Wolfe, NewPages.com