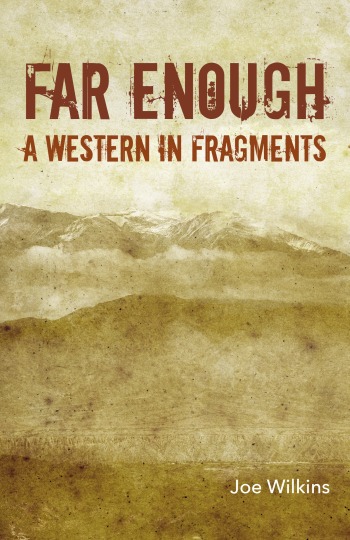 Though Joe Wilkins’s new collection of short fiction set under the big Montana sky may have all the trappings of a traditional Western—long shots of sage flats and blue mountains, late nights at the dingy local watering hole, and a hard-working cowboy making time with the boss’s daughter—Far Enough is far from traditional. A series of short prose fragments told from several viewpoints, Far Enough follows Willie Benson, Wade Newman, and young Jackie Newman as they crisscross the high plains of eastern Montana, each searching for something to hold onto. Wilkins’s narratives—splintered, wending, intertwined—sprawl out beneath a huge, dazzling sky filled with “blue lightning run the wrong way, red eruptions and the slow fade to gold, a white ache along the horizon.” Poetic, darkly humorous, subversive—Far Enough is a Western for our time.

Equal parts rocketing narrative and arresting imagery, Far Enough trains a grave attention on the longings and flaws of ranch people, and the injustices they inflict and suffer. In these fiercely-charged “fragments,” Joe Wilkins distills small-town, Big-Sky culture into a brilliant, austere, yet addictive liquor. —Anna Keesey, author of Little Century

Joe Wilkins’ portrait of the modern American West is told via one-page dramatic tableaux that read like those suddenly captured moments in poetry, in language as simple and unadorned in its beauty as the Montana prairie. These men and women are laconic and unassuming in their wants, fears, desires, and Wilkins reveals them to us wholly, unsparingly, vividly. The vision here is clear-eyed and humane. If Chekhov were born in Billings instead of Taganrog, he might very well have written about people like this, just as Wilkins has. —Daniel Orozco, author of Orientation: And Other Stories

When I’m asked what an ideal story for our magazine would be, I think but don’t say: like a Joe Wilkins story. Far Enough is tight, chiseled and beautiful, full of language so physical it seems like landscape itself. You can feel the West in these words. But you can feel the people too, their stories equal to the place. I love Joe Wilkins’s stories. I always have. —David Gessner, Editor-in-Chief at Ecotone